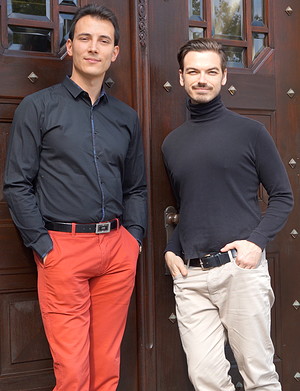 American tenor Shawn Mlynek and Romanian pianist Dan Marginean give an assured and captivating concert performance as part of the St Giles’ at Six series. This diverse initiative with a fifty-year history brings both international and local performers to Edinburgh’s foremost nave, creating, beneath those soaring ceilings, one of the most accessible classical music dates the city has to offer during the autumn-winter season.
Foundational and heroic, singing tenor can confer great responsibility and yet Mlynek, who has studied at the Conservatory of Music of the University of Cincinnati and is engaged to perform at Carnegie Hall in New York next year, clearly relishes the challenge of a varied European repertoire combined with complex church acoustics. The evening’s performance opens with music from the Italian composer Ottorino Respighi and the five-part suite of songs for voice and piano Cinque Canti All’Antica. Mlynek’s vocals are resonant and massively disciplined throughout the opening, matched note for note by Marginean’s piano. Particularly impressive is the swift change in expression between the sombre, fatalistic Ballata (ballad) followed immediately by Bella Porta di Rubini, an altogether brighter and more hopeful song. The contrast serves to emphasise and improve both pieces, while giving Mlynek an early chance to demonstrate his range of expression.
Following Respighi is a foray into Franz Schubert’s Schwanengesang (swan song), written towards the end of the Austrian composer’s life and published after his death. One of the standout pieces of the night comes early in this section with Kriegers Ahnung (warrior’s foreboding), a song that is by turns militant, sentimental and transcendental as it portrays a young soldier’s scattered thoughts at night. Marginean on piano plays brilliantly, the softer keys of remembrance building to a warlike crescendo that has the piano sounding almost organ-like in the cavernous church setting. Mlynek’s drama and force singing in German is such that, whatever one’s knowledge of Schubert or of the language, the song’s subject is vividly conveyed to the audience. The section finishes on a surprisingly rousing, upbeat tempo with the irrepressible Abschied (farewell).
The third section of the concert focuses on the Slovak composer Vítězslav Novák. Three songs are played in this tradition, beginning with the hauntingly evocative Chodzila Mariska (Mariska’s walking home). Referred to as a folk arrangement, there is a direct elegance to the song that, perhaps unsurprisingly, is both more affecting and more universal than many operas of greater renown. Of the subsequent songs, Išiel Macek is wonderfully festive and A chtora dzivočka features some superlative piano flourishes.
The fourth and final section of the concert explores a scene from one of the most popular “Opera Buffas” (comic operas) of all time, Don Pasquale, a familial tale of misunderstanding by the Italian composer Gaetano Donizetti. Performing the tenor role of Poor Ernesto, the nephew of the eponymous Don Pasquale, Mlynek ends the concert on a powerful, dramatic note.
Racing through a veritable tour of operatic traditions and European styles in what seems to be an effortless manner, Shawn Mlynek and Dan Marginean are clearly young musicians of formidable talent and impressive knowledge. To be able to see such a concert performance in such a venue is quite spectacular and a wonderful way to showcase St Giles’ Cathedral in a new and animated light.